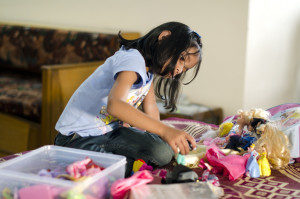 The pressure to live up to a certain ideal of beauty and body proportions, promoted by popular media and culture, starts at a very young age. The most alarming statistic is the one that shows that by the time girls reach the third grade, 42% of them wish they were thinner.

A very popular doll, that is owned by almost every American girl between the ages of 3 and 11 (and often times more than one doll at a time), is famous for its exaggerated body proportions, which are so far from reality that only 1 in 100,000 women would actually have those same proportions (according to popular author Kevin Norton).

There are other studies, such as that conducted by the University of Sussex in 2006, which found that such dolls “may damage girls’ body image, which would contribute to an increased risk of disordered eating and weight cycle.” Since these are dolls that children start playing with (or are gifted with) from a very early age, you could say that the negative programming begins from the age they start playing with the doll.

If the above is true, then conversely, if children are given toys such as dolls that reflect a healthy and realistic body image, it would help them be more loving and accepting of their own bodies, isn’t it? Are there any alternatives to the popular dolls that are made in the likeness of a real woman? Before we go into that, let’s look at the top five reasons how and why dolls can affect a child’s body image.

What are the alternatives to these popular dolls?

The Lammily doll is a unique doll that looks and dresses like an average young woman. It is designed to have typical human proportions (scaled, of course!). It stands 11 inches tall and can stand on her own two feet. Her elbows, hands, knees and feet are articulated, making her more flexible, active, and ready to go on any kind of adventure with your child (rock climbing, anyone?)

Lammily has her own branded line of clothes and accessories that make her look like any well-dressed young girl out there. The Lammily Marks sticker sheet is a brilliantly designed set of stickers that look like acne, bruises, cuts, mosquito bites, and stretch marks. These help young children make her look even more like themselves or like someone they know. They help them understand that flaws are an integral part of the human body. You can be born with them or they can happen to you as you grow, but it doesn’t make you any less lovable.

The adventures that Lammily goes on are numerous and ideas to make these adventures come true are available on the website. You can learn to make a wheelchair, an oxygen tank, a zipline, a flight suit, etc., to let your child give Lammily any experience of her liking.

With the Lammily doll, there is no limit to your child’s imagination, both for the present and for the future! Gifting a Lammily doll would be giving your child the key into the world of self-love and self-acceptance.