Have you ever walked past the HUGE pink Barbie aisle in ToysRus and wondered, why can’t they just make a doll with realistic proportions? It can’t be that hard!

Well, In 2013 I was shopping for a doll or a niece of mine and thought the same thing.

My mind started to wonder — just what would a “realistically proportioned” doll look like?

So, I decided to make one myself…

With the help of a really good 3D modeler, I made a 3D printed model of a woman with average measurements. I found the 3D modeler online and had a local 3D printing shop in Pittsburgh make the model for about $200.

The 3D printed model looked like, well, a typical woman.

I then thought, how am I going to make this white 3D printed model, look like a fashion doll? Maybe I can paint it?

I can go to the arts and crafts store and make it look like a doll! It will look great!

Thankfully, the rational part of my brain realized that my arts and crafts skills were pathetic and suggested that I just Photoshop the white model to look like a toy doll. 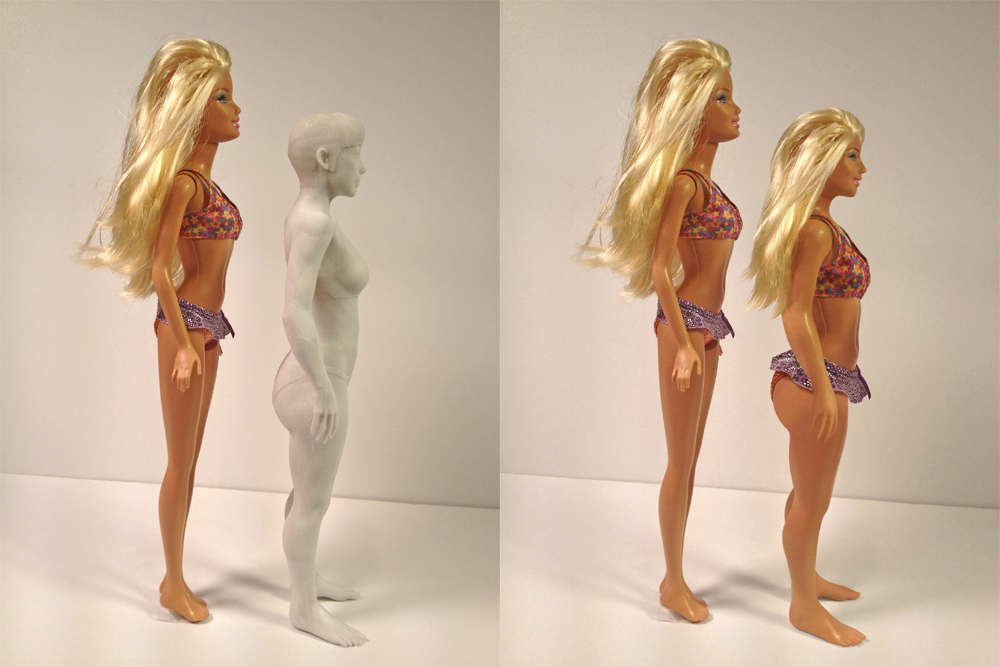 In July 2013, I emailed the HuffingtonPost these images I made, which showed what fashion dolls would look like if they were made according to typical human body proportions. What happened next was nothing short of incredible.

HuffingtonPost, which broke the story, was getting hundreds of Facebook shares every minute.

Soon, I was getting interview requests from BBC, CNN, LA Times, BuzzFeed!

Even Demi Lovato tweeted about the images! 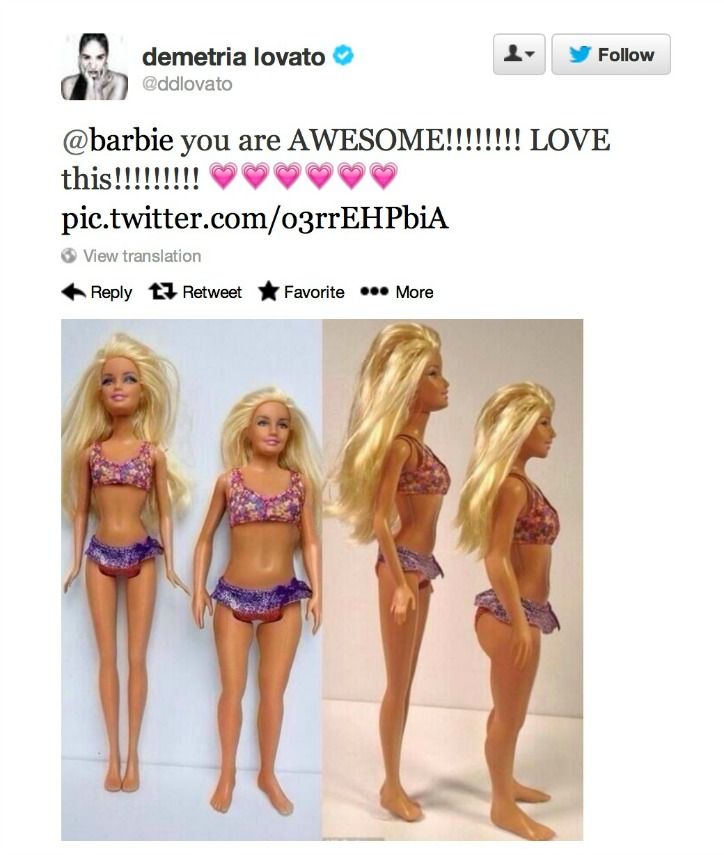 Today, if I am to show these images to a random person, at least 1 in 4 of them say “Yeah, I saw that.” To think that my images were first shared in a single email to HuffingtonPost, before making such waves, speaks volumes to the power of the internet and what you can do with no connections and no money. After these images were made, I was getting requests from moms to actually buy the doll. But because “Normal Barbie” was just a Photoshop creation, I just had to tell them that the doll they saw didn’t exist!

The emails I received from moms confirmed there was demand for a doll with realistic proportions. But I had absolutley NO MONEY to make a prototype, never mind meeting a manufacturer’s minimum order quantity, which I knew would be at least 25,000 dolls.

I also had no way to actually sell the doll, even if I somehow managed to get the money needed to make the first 25,000 of them.

Kickstarter, which allows people to raise money via preorders seemed like the perfect solution.

So, I browsed previous Kickstarter projects and realized I needed 4 things if I was going to do a successful Kickstarter campaign.

2. Pricing information from the manufacturer

After finding out that a physical prototype of a toy doll cost an arm and a leg ($10,000), I decided to create a digital prototype in 3D. So, I Googled “realistic 3D renders” and found this incredible image in a Mashable article titled “35 Insanely Realistic 3D Renderings“. 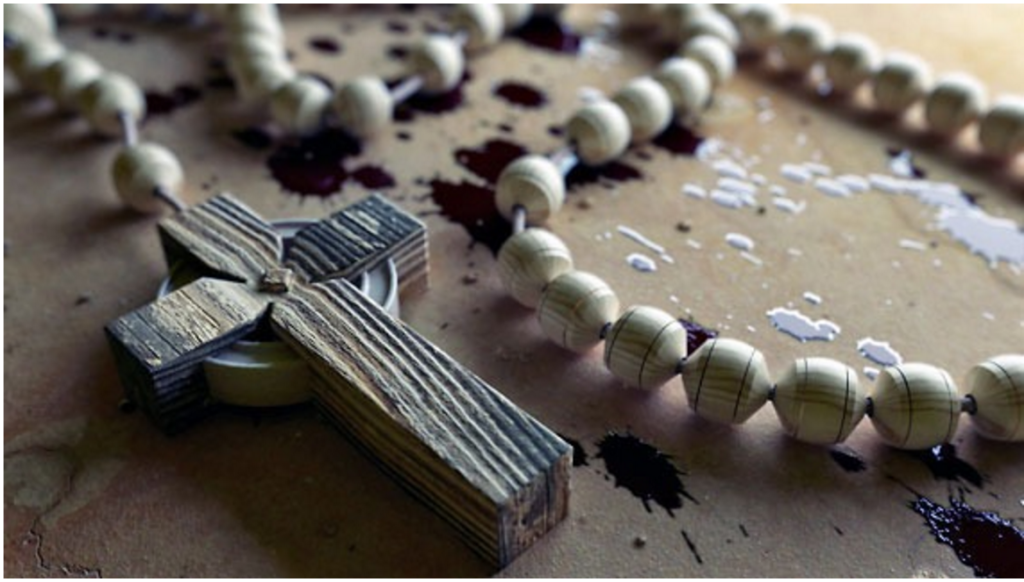 Believe it or not, that’s a 3D render, not a photo!

I contacted Thomas Desjardins, the artist behind that “photo”, we agreed on pricing, and he, with the help of his friend Andrew Dormody, made the digital prototype in the form of 3D illustrations and animations.

Most of the 3D illustrations Thomas and Andrew made used the white background format below. 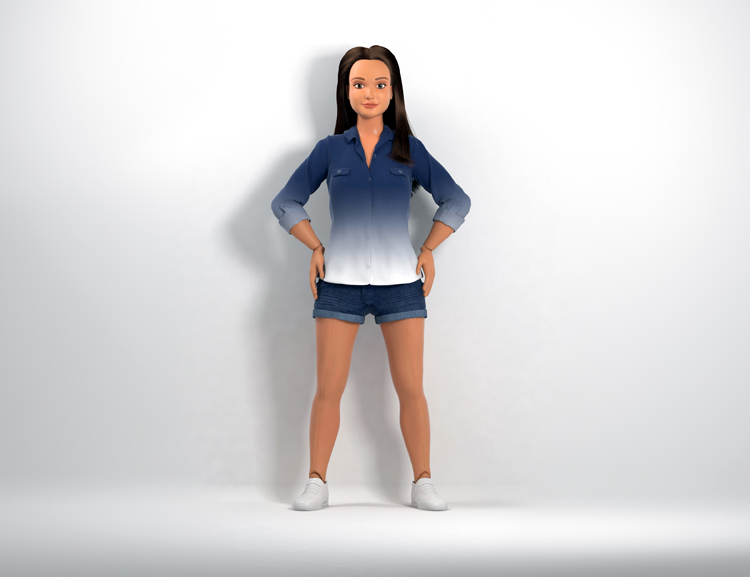 But some of the 3D illustrations used Photoshop magic to make it look like kids were playing with a doll that was already manufactured!

The 3D printed white model on the right, which was also used to create “Normal Barbie”, was used as a stand in.

If you look closely, you’ll see that the arms of the white model broke off. I shipped the doll to a news agency and, on the way there, the arms broke off. Since then, my mom has glued the arms back together.

If I didn’t have accurate pricing information from a manufacturer, I knew that the crowdfunding project could become a giant disaster. Because if I undervalued the costs to produce the dolls I’d have to give everyone their money back and no dolls would ever be produced!

I Googled “China manufacturer sourcing” and found 5 companies who I felt had a lot of experience based on their past clients. I asked them if they can link me up with a quality manufacturer, find out the exact minimum order quantity from this factory would be, and what the price per unit would be. Roger Rambo, from Global Sourcing Specialists, and a former VP of manufacturing at Mattel, found everything I needed.

It was a months long process of going back and forth with the manufacturer and Roger, but it was well worth it because I knew my information was solid.

For the video, I knew that if people were to take the crowdfunding seriously, the video had to be as professional looking as possible. So, I hired a camera crew for a day. I thought it was going to take 2 hours to film me speaking into the camera but it took close to 6 hours! I didn’t memorize the script well and thought I could just “go with the flow”.

That’s why, in the final crowdfunding video, it starts out bright and early, and ends when its already nighttime! 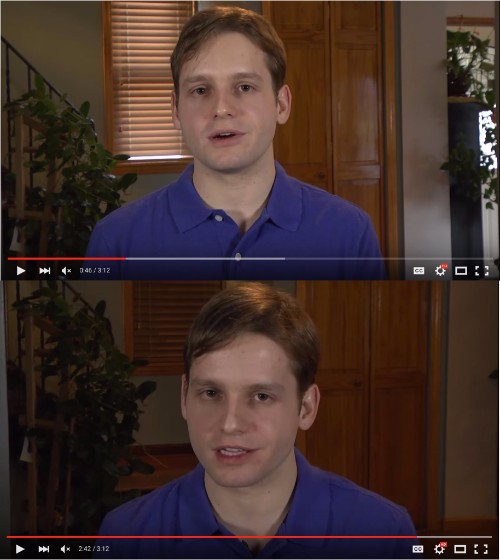 Man oh man I look tired in that last frame!

Ever since that experience I never just “wing it” in front of the camera!

Most of the audio for the crowdfunding video was recorded on my old iPhone 4S. And because the heating in my house makes a whistle sound, I had to record only when the heating stopped working.

I used iMovie to edit the video and hired an editor on Elance.com to give it a more professional feel in some parts.

I checked the crowdfunding video just now and see that it has almost 2 million views! Not bad for something spliced together with iMovie and an iPhone 4S microphone!

Name of the Doll

Believe it or not, one of the hardest parts of the entire process was the name.

I orginally wanted the line of dolls to be called “Just Jenn” – to signify the simplicty and wholesomeness of the product. But a family friend convinced me otherwise when she told me the name could become a joke – “Oh, just ignore her! That’s just Jen!” The nail in the coffin was when I found out that Just Jenn was already trademarked.

Another name I and my family were considering was “True to You”, but I decided against it because I felt it was trying to say too much.

So, I chose Lammily for the name – a combination of my family name, Lamm, and the word family. I felt it would give the line of dolls an authenticity – they weren’t being made by a huge corporation, but real people who care.

Putting it All Together

In February of 2013, I had everything I needed: a prototype, manufacturer pricing, a crowdfunding video, and a name!

I found out that because the doll prototype was digital and not physical, it would be rejected by Kickstarter, which only allows physical prototypes.

So, I had a choice between Indiegogo, and Tilt.com (which is like a white label version of Kickstarter with no % fees).

I chose to use Tilt.com, which allowed me to host the crowdfunding on my own domain (Lammily.com). What sealed the deal for me me was Tilt’s excitement in hosting the Lammily crowdfunding and their customer support (and no, they’re not paying me to say that!).

When all was said and done, I had spent $15,000 for all the different elements of the crowdfunding. This was almost half of my yearly salary while working on my freelance job. So, if the crowdfunding didn’t go well, I would have wasted that amount, plus many months of my time putting it all together.

Waiting to see what happens…

When the crowdfunding site was ready for launch, I emailed journalists from top publications (HuffingtonPost, BusinessInsider, The Atlantic, etc) a password protected Lammily.com which showed the crowdfunding page to them before it was released to the public.

How did I get the emails of these journalists? Most were from projects I worked on in the past. But I initially found all of them just by looking at previous articles they wrote related to body image and then Googling (their name) plus email address.

The slogan for the crowdfunding was a spur of the moment decision in the frantic days to get everything 100% organized before launch day. I was watching the completed crowdfunding video and noticed, in the interview with CNN, I said that “Average is Beautiful.” To me “average is beautiful” means that “real is beautiful”. I don’t think something has to be considered out of this world to be beautiful. An “average” sunset is just as beautiful as any other sunset. The night before the launch, I just laid in bed, thinking of what may happen, what may not happen. I got no sleep at all. By 8:00 am I just went downstairs to my computer and started to email journalists a confirmation that Lammily.com was now live.

I waited and waited to see what the reaction would be online.

At one point I gave up hope when almost no contributions were coming in even past 11:00 am.

I thought to myself “Hey, I did my very best, I tried.”

Then, something magical happened!

Contributions were coming in at a rate of $1,000 a minute and it wasn’t stopping! I saw that the article about Lammily’s crowdfunding was going viral on HuffingtonPost and, right then and there, I knew it would make it. It had snowball momentum at this point.

I woke up the next day to my mom, who told me that the crowdfunding goal of $95,000 had met its goal in less than 24 hours. The feeling of working on something so complicated for many months and for it to succeed past my wildest dreams is probably one of the best feelings I think is possible in the world.

But, throughout the entire process, I had a thought in the back of my head that maybe what I’m doing will not only fail, but will bomb in a spectacular way.

Throughout the process to make the crowdfunding a reality, I had toy industry experts telling me what I was doing was impossible:

“There’s no demand for a realistic doll, kids won’t want to play with it, and the clothes will look terrible on such a doll.”

“You CANNOT make the prototype in 3D, it has to be physical! It makes no sense for you to make it in 3D.”

As cheesy as it may sound, I think what kept me going was my belief that it was wrong to not even try to make this happen. It was an injustice that people complained about Barbie and none of the big companies believed in the commercial viability of a realistic doll. It was time for someone, anyone to do something.

I knew that if this realistic doll came to fruition and helped just one girl, one woman feel beautiful, then it would all be worth it.

But despite all the complexities to make the crowdfunding happen, all I was doing was presenting an idea for what may happen. It took thousands of backers to actually make that idea a reality.

The months that followed saw the creation and manufacturing of the world’s first realistically proportioned fashion doll.