There’s no question that women face beauty standards in ways that most men don’t have to deal with. But that doesn’t mean that men haven’t felt the pressures.

What follows is a study of how perception of the men’s “perfect body” has changed through the years.

Today, obesity is often associated with poor economic status, but before people had easy access to food, plump figures were considered attractive because they suggested upper class status.

In the late 19th century, a wide waist showed that you could afford lavish feasts and was a status symbol of money. In 1866, a Fat Man’s Club was founded in Connecticut and and spread throughout the country. The requirement? You must weight at least 200 lbs.

The Fat Man’s Club ended in 1903 as America was becoming less fond of the overweight body type. Access to food was becoming easier. A wave of incoming immigrants, who were perceived as overweight and lower class, fueled xenophobia in a predominantly white population.  By the 1930s Hollywood presented a youthful, fit ideal. Actors needed to be slim for cameras, which automatically added perceived weight.

In 1940 William H. Sheldon, PhD, MD, a Harvard psychologist, introduced the concept of body types. According to him, the ideal body type was the muscular mesomorph to which he attached nearly all positive personality traits, without any data or experimentation.

Hollywood represented the v-shaped muscular mesomorph, but not nearly to the extent that modern cinema does.

On the bodybuilding front, Charles Atlas, the precursor to Arnold Schwarzenneger, founded Charles Atlas Ltd. in 1929 to sell his exercising methods. His “world’s most perfectly developed” body was however, very different from the body that became “ideal” in the 1980s.

Between 1945 and 1960 America achieved rapid economic growth. During this era, a man’s identity was tied to his job. To get ahead in the corporate workplace, features like height were considered beneficial by Vance Packard, in his book, The Pyramid Climbers. A crew cut was the haircut of choice, and angular facial features were preferred, according to the Merton System of Face-Reading. Still, according to Lynne Luciano in her book Looking Good, the most common determinant of your access to the top of the corporate ladder laid in your looking like “the fellow next door who was assumed to be white and Anglo-Saxon,” a feature of corporate America to this day and reflected in today’s white washed popular culture.

By the late 1960s, young Americans were fed up with corporate bureaucracy, companies profiting from the Vietnman War, and blind obedience to authority. Many in the middle class turned inward, focusing on getting in touch with their true selves…

“Members of the counterculture were often the highly educated children of the prosperous and influential middle class; yet they turned their backs on affluence and conformity. With their attention focused on protest, social change, and discovering their inner beings, young men appeared to care little about fitness or body image. They didn’t work out, they were fond of drugs, and many seemed unacquanted with the notion of a comb. On the other hand, they were likely to prize the length of their hair, wore interesting clothes, and made a great fuss over eating natural foods.” — Lynne Luciano (Looking Good, Male Body Image in Modern America)

The counterculture was embraced by musicians who preached peace and love during the Vietnman War.

“In the 1960s, beautiful bodies hadn’t been very important. Young Americans, and some not-so-young ones, relied on dramatic clothing and masses of hair more than perfect measurements to express individuality and sexuality.” — Lynne Luciano (Looking Good, Male Body Image in Modern America)

“In the 1970s, instead of being expressed through political activism and protest as in the 1960s, youthfulness would be projected by the body – a body that was as sexy, fit, and lean as an eighteen-year-old’s.” — Lynne Luciano (Looking Good, Male Body Image in Modern America)

The trend continued into the 1980s, when health clubs and working out became even more popular, and skimpy clothes began to accentuate the body. Wages and job security declined in a poor economy, leading men to look for different ways of self-validation. Body building, once seen as a fringe activity, became a respectable and popular sport amongst the Me Generation. The smooth Charles Atlas look was replaced with the “cut” body: chiseled muscles and noticeable veins. The idea that you could sculpt your body and achieve personal transformation as reward is shared by the decade’s action movies, starring Arnold Schwarzenegger, Sylvester Stallone, Jean-Claude Van Damme, etc.

“The films operated on the notion that one man, a pinnacle of physique, would be the savior, and that strength, guts, and glory were the resolution to any challenge these characters would face. This mythos, of unreal strength, massive bodies and muscles, and ultimate physique culminated in James Cameron’s Terminator (1984), which literally took hyper-masculinity to the extreme, turning the body into a machine, rather than a flesh and blood human, susceptible to harm. Terminator marked the apex of monolithic masculinity as a defining characteristic of the action genre.”— HDNet Movies

1990s popular culture shifted from hypermasculinity to an everyman.

The leading men of action films became blue-collar, everyman types. Eddie Murphy’s Axel Foley was quicker with his wit than his fists, and so it would go with Riggs and Murtaugh (Lethal Weapon, 1987), and John McClain (Die Hard, 1988), as well as Speed (1994), Bad Boys (1995), and Con Air (1996). Sarcasm, wit, and ingenuity were their weapons – and guns, of course ­- instead of muscles and masculinity. — HDNet Movies

Brad Pitt’s Tyler Durden in Fight Club  (1999) may have been the most influential everyman, whose not-too-muscular and lean physique, is popular to this day.

Even now, still, it’s ‘Brad Pitt in Fight Club’. That’s the body blokes ask for,” says personal trainer Tim Walker. “He looks great but he’s not massive. He’s just got really good abs, good arms and an alright chest. And that’s what people want: to be lean, have a six pack…It used to be bodybuilding…but that look’s unattainable — you have to take steroids. With physique training, instead of spending 10 years trying to build mass, you just get really lean.” — Esquire 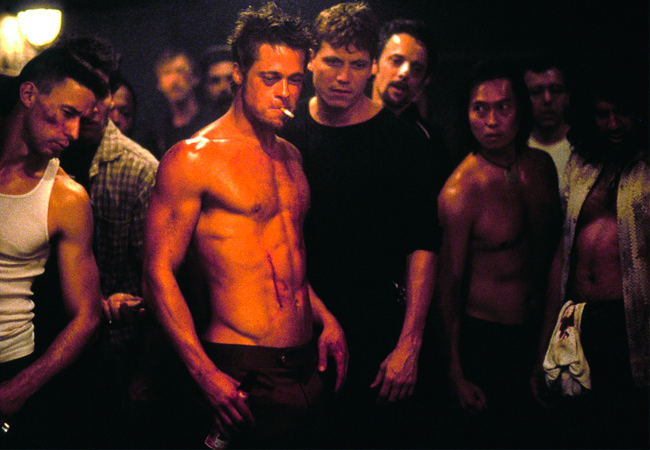 In 2012, a study from the Institute of Neuroscience, Newcastle University and the Department of Psychology, University of Northumbria, used 3D visualization software to estimate male and female body preferences. The ideal male body, for both men and women, was lean and muscular, not dissimilar from the body of Brad Pitt in Fight Club.